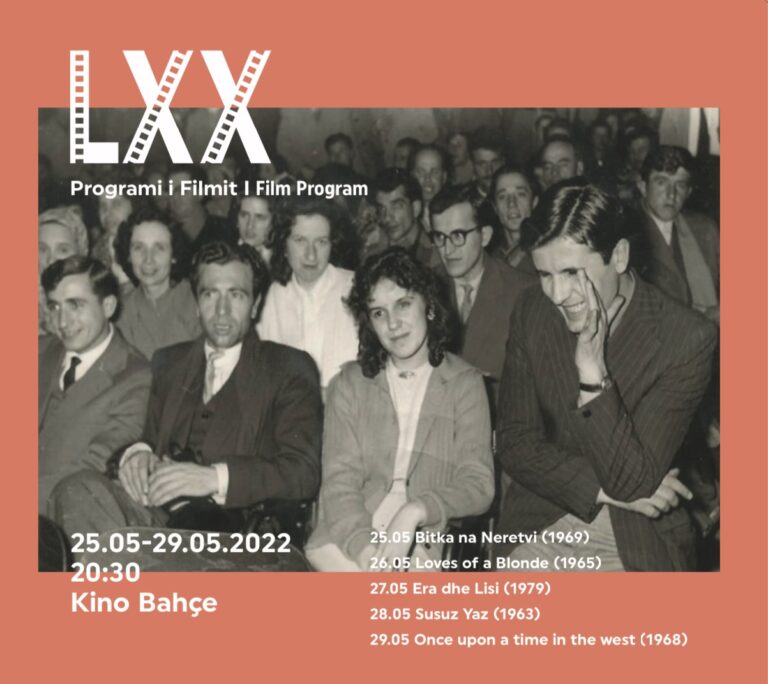 Lumbardhi Foundation continues the 70th anniversary program with LXX, this time on the big screen!

Five films from different countries screened at Kino Bistrica during different decades of cinema life will be screened between 25-29 May.

The program opens with the epic partisan and anti-fascist film The Battle of the Neretva (1969) directed by Veljko Bulajić, based on events from World War II. This is the most expensive film produced in the former Yugoslavia, nominated for the Academy Award for Best Picture in the Foreign Language Film category. Orson Welles, Sergei Bondarchuk, Curt Jürgens, Bata Živojinović, Ljubiša Samardžić and Faruk Begolli are among the international cast.

The opening will be addressed by the director of the Sarajevo Film Center, Ines Tanović, the curators of the film program as well as former employees of the Bistrica cinema.

The opening film will be screened on May 25 at Kino Bahçe, following the launching of the book “Lumbardhi: an episodic story”, starting at 19:00.

The films of the LXX program have been carefully selected by the curatorial group consisting of the Deputy Director for Research and Programs at the Lumbardhi Foundation, Bengi Muzbeg, the director, curator and researcher Kumjana Novakova and the Artistic Director of DokuFest, Veton Nurkollari.

The LXX Film Program was made possible with the support of Raiffeisen Bank Kosova, the European Union, Swiss Agency for Development and Cooperation (SDC), the Ministry of Culture, Youth and Sports, International Relief Fund of the German Federal Foreign Office, the Goethe-Institut, and other partners.