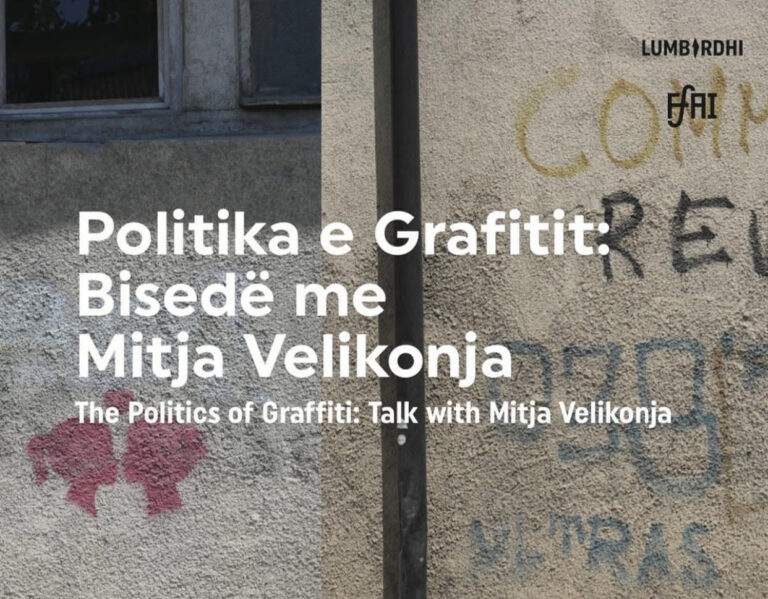 In June, researcher, theorist, and professor Mitja Velikonja embarked in Prizren for a talk on the socio-political agency of graffiti in the Balkans. Dr.Velikonja presented his most recent book “Post-Socialist Political Graffiti in the Balkans and Central Europe” which uses case studies of political graffiti in the post-socialist Balkans and Central Europe to explore the use of graffiti as a subversive political media. Following this presentation, Dr.Velikonja had a discussion with sociologist Tevfik Rada on the important role of graffiti on exhibiting the socio-political standpoints of subcultures in Prizren and wider.

The Politics of Graffiti: Talk with Mitja Velikonja was supported by FfAI.

Dr. Mitja Velikonja is a Professor for Cultural Studies and head of Center for Cultural and Religious Studies at University of Ljubljana, Slovenia. Main areas of his research include contemporary Central-European and Balkan political ideologies, subcultures and graffiti culture, collective memory and post-socialist nostalgia. His last monographs are The Chosen Few – Aesthetics and Ideology in Football-Fan Graffiti and Street Art (Doppelhouse Press, 2021), Post-Socialist Political Graffiti in the Balkans and Central Europe (Routledge, 2020, awarded as one of the best achievements of University of Ljubljana in the year 2020, already translated into Serbian and Albanian and in translation in Slovenian and Macedonian).

Despite the increasing global digitisation, graffiti remains widespread and popular, providing with a few words or images a vivid visual indication of cultural conditions, social dynamics and power structures in a society, and provoking a variety of reactions. Using qualitative and quantitative methods, as well as detailed interdisciplinary analyses of “patriotic”, extreme-right, soccer-fan, nostalgic, and chauvinist graffiti and street art, it looks at why and by whom graffiti is used as political media, and to/against whom is it directed? The book theorises discussions of political graffiti and street art to show different methodological approaches from four sites of meaning: context, author, the work itself, and audience. It is of interest to the growing body of literature focussing on (sub)cultural studies in the contemporary Balkans, transitology, visual cultural studies, art theory, anthropology, sociology and studies of radical politics. The book was published first in English (2020), translated in Serbian (2020) and Albanian (2022) and will be published this year also in Slovenian and Macedonian.